Wild populations of many species of crocodilians have recovered around the globe from their former threatened or endangered status due to effective conservation measures and sustainable management programs.  However, eight species remain endangered, six of these critically. Some of these endangered crocodilians lack the valuable skins that have made sustainable management programs so successful for other species.  Some of them live in countries where sustainable use of wildlife is not an option. Most of them continue to be threatened with extinction as a result of habitat degradation and loss, pollution, and in some cases, hybridization. Some continue to be killed illegally for their skins, their meat or because they are perceived to be a threat to human safety, livestock or fisheries.

Cuban crocodile, Crocodylus rhombifer, has the smallest natural range of any crocodilian.  It survives only in the Zapata Swamp on Cuba and in the Lanier Swamp on the nearby Isle of Youth.  This species is threatened by illegal hunting and hybridization with the American crocodile.

Orinoco crocodile, Crocodylus intermedius, is one of the world’s largest crocodilians.  It is found only in Colombia and Venezuela.  It was saved from extinction by Venezuelan ranchers who started captive breeding programs and protected these crocodiles on their lands.  The species is recovering slowly.  Re-introduction programs have been underway in Venezuela for a long time, and have recently been initiated in Colombia. 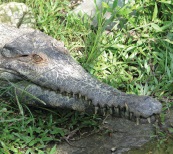 West African Slender-snouted crocodile, Mecistops cataphractus, is a forest species that may be rapidly approaching extinction in West Africa where it is hunted for its meat.  Only small numbers still exist in the wild in isolated populations.

Chinese alligator, Alligator sinensis, survives in the wild in the lower Yangtze valley of eastern China.  Less than 150 individuals are believed to remain in the wild due to agricultural development, however large numbers are held in captivity.  Habitat restoration and reintroduction programs are being initiated in China.

Tomistoma, Tomistoma schlegelii, is a large slender-snouted crocodilian found in peat swamp forests and in slow moving rivers in Malaysia and Indonesia.  It is a mound-nesting species which lays the largest eggs of any living crocodilian.  Similar to the Gharial in appearance, adult Tomistoma feed on a wide variety of vertebrates including primates.  It is threatened in the wild due to agricultural development, primarily due to the expansion of oil palm plantations.

Siamese crocodile, Crocodylus siamensis, may be extinct in Viet Nam and close to extinction in Thailand.  Small breeding populations exist only in Cambodia, Lao and in East Kalimantan, Indonesia.  It has been over-hunted for its skin and in recent decades for farming stock.  Re-introduction programs are underway in Cambodia, they have been attempted in Viet Nam and are being initiated in Thailand.

Philippine crocodile, Crocodylus mindorensis, is found in wetland habitats, including some at high elevations, but remaining populations are found only in the northern and southern portions of the country and are extremely small and isolated.   Fewer than 250 remain in the wild.  Captive breeding and reintroduction projects involving local communities have been initiated in the Philippines.

Gharial, Gavialis gangeticus, is a large, but relatively harmless, fish-eating species.   Its remaining populations are threatened by the loss of nesting habitat from illegal sand mining, pollution and the use of gill nets for fishing.  It is one of the world’s largest crocodilians and certainly the most unusual.  Adult males develop a large fleshy bump around their nostrils on the end of their extremely long, slender jaws.