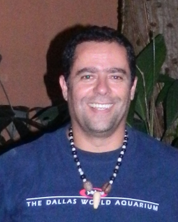 Luis Sigler has 28 years of experience working with crocodilians. He was researcher and curator of the Crocodile collection and nocturnal mammals at ZooMAT (Miguel Alvarez del Toro zoo) in Chiapas Mexico for 14 years. He conducted several studies in Mexico for its three native species: Chiapas’ caiman, American crocodile and Morelet’s crocodile.

Since 2005, he has been working at the DWA within the reptile collection but especially with the Orinoco crocodile conservation program.  The DWA has been the only institution breeding this species outside of Colombia and Venezuela, and in 2008 sent 54 of these crocodiles to Venezuela to be released in three protected areas.  Another 38  Orinoco crocodiles have been transferred to a dozen facilities in the US and Europe to promote the ex situ conservation for this large crocodile.

He is the crocodilian assessor for the Mexican Biodiversity Commission (CONABIO), studbook keeper of the Orinoco crocodile for the AZA and member of the IUCN/SSC Crocodile Specialist Group since 1996.